I’m going to let you in on a little secret about car dealerships. They’re all the same….except for the people.

The fact is, every dealership in the country is built and designed to let you buy a car and service your vehicle. In the grand scheme of things, it’s a pretty level playing field.

So what makes one dealership stand apart from the rest? The people who work there! 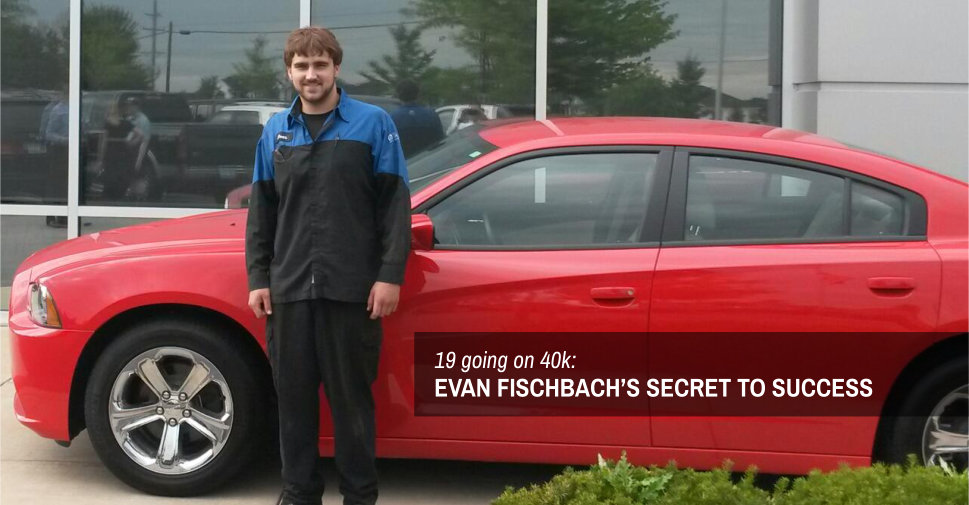 Over my four year career with the LaFontaine Automotive Group, I’ve come to realize just how blessed we are to have some of the most passionate and talented individuals working for us in all aspects of our business.

We all come from various backgrounds with diverse skills and aptitudes. When you take these individuals and put them together in a positive working environment, amazing things can and do happen.

Not too long ago I told you how Doug Kropp of LaFontaine Toyota became one of the few Toyota Master Diagnostic Technicians in all of Michigan – a rare and huge accomplishment.

Today I’m sharing this fascinating story that recently ran on Bloomberg News about Evan Fischbach, one of our service technicians at LaFontaine Chrysler Dodge Jeep Ram in Saline, MI.

As you’ll see, Evan is truly an extraordinary young man who is blazing his own trail in what some may consider an unusual way…

Shop Class Not for Slackers as Mechanic Out-Earns Peers

Aug. 25 (Bloomberg) — Evan Fischbach, an auto mechanic who works at the LaFontaine Chrysler Dodge Jeep Ram dealership in Saline, Michigan, talks about the advantage of taking shop class in high school. Two years out of high school, Fischbach is earning $40,000 a year, about three times as much as the average 19-year-old high school grad. His secret: shop class.

Fischbach, 19, has known he wanted to work on cars ever since he took an automotive class in his junior year of high school in Saline, Michigan. His college-educated parents wondered if he was aiming too low.

Then when Fischbach was still a junior, a local auto dealer desperate for mechanics hired him as an apprentice in the service bay. Now he’s earning about three times as much as the average 19-year-old high school grad and slightly more than the national median, according the Bureau of Labor Statistics.

“Friends weren’t interested in auto shop when I suggested it and now I think they wished they had tried it,” said Fischbach, who works at the LaFontaine Chrysler Dodge Jeep Ram dealership. “I’m not rich, but I’m not hurting, either.” 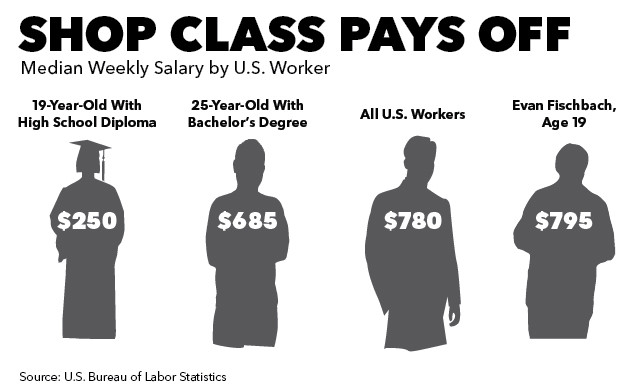 Fischbach is an all too rare success story that educators, legislators and executives are eager to replicate. With schools focused on preparing kids for college, shop class has gone the way of stenography class in much of the U.S. Companies from Toyota Motor Corp. to Siemens AG and International Business Machines Corp. are pushing high schools to graduate students with the real-world skills business needs.

The message is getting through. This year, for the first time in a decade, the U.S. government boosted funding for high school and college vocational education, though the $1.125 billion war chest is $188 million smaller than it was in 2004.

Proponents say re-emphasizing vocational education will help reverse the hollowing out of America’s middle class and combat rising inequality. Wage growth since 2009 has been the weakest since World War II even as the rich get richer.

There are 29 million “middle-education” jobs that pay more than $35,000 a year, considered a threshold to the middle class, according to Georgetown University research. Of those, 22.9 million require only high school or some post high-school training. Fischbach’s job pays enough to launch him on a once-familiar trajectory: start a family, buy a home, pay taxes.

Fifty years ago, most American kids in middle and high school attended shop class, where they learned to make ash trays, rebuild engines, weld metal and even market products. As the space race gave way to the high-tech era, policy makers decided such skills were unnecessary. College prep classes gradually supplanted shop, which by then was perceived as a place for slackers and stoners.

The average number of high school credits earned in career and technical education fell 15 percent from 1990 to 2009 at the same time core academic credits in study areas such as English, math and science rose 20 percent, according to the U.S. Department of Education.

“It became seen as a dumping ground for kids the regular school couldn’t figure out what to do with,” said James Stone, director of the National Research Center for Career & Technical Education in Louisville, Kentucky.

Those prejudices are even more prevalent now that many parents expect their offspring to attend a four-year college. While many parents agree that more students should attend vocational training, the prevailing attitude is: Not my kid.

“For a lot of parents, and policy makers, it’s easier to say we need to send more kids to college,” Stone said. “Parents go, ‘Yes, that’s what I want to do. My kid will be successful.’ Then after four or five years they come back with a lot of bills and they’re sleeping on the couch.”

Yet businesses can’t find enough people to fix cars and work in factories. Mike Hughes, the service manager who hired Fischbach, finds himself competing with rival dealerships to recruit kids right out of high school. If he can’t find candidates there, he has to train them from scratch.

“Nobody wants their kid to be a mechanic,” said Hughes, who estimates Fischbach eventually will pull down $60,000 a year. “They just don’t know how good of a living it is.”

Like many of his contemporaries, Mike Dales, 28, didn’t bother with shop class because he was told college prep classes were more important than building bird houses. His school even charged an extra fee to take shop.

After graduating, Dales dabbled in trade school before realizing that he wasn’t going to grasp the math needed for mechanical engineering. He ended up slinging crab claws at Red Lobster before taking a job last year at Area Tool & Manufacturing in Meadville, Pennsylvania, where he’s now making parts for the medical, automotive and tech industries.

“It always amazes me what I can come up with” after starting with a “chunk of steel,” said Dales, who wishes someone had pointed him toward a vocation when he was a teen.

The parents most likely to be dubious about shop class held down manufacturing jobs themselves, only to watch them disappear. The U.S. lost 6.1 million such jobs from 1997 to 2009. Only 644,000 have been added since, according to the BLS.

“I mean, how do you walk into the classroom and talk to a 16- or 17-year-old kid about getting into the shop when he had a parent who used to work there but was laid off 10 years ago?” said Ashleigh Smith, office manager of the shop where Dales works. “It’s difficult to explain that the industry is coming back when you have that kind of personal experience.”

Advocates of vocational education are pushing high schools to identify students’ career interests earlier and guide them to both vocational and other classes to support that career whether the ultimate goal is college or not. Progress is patchy, and many of the newer programs require students to leave their neighborhood schools altogether or travel to class.

Last year, 32,254 kids enrolled, up 30 percent since 2000. The program has become so popular that some kids are being turned away, said Judy Savage, executive director of the New Jersey Council of County Vocational-Technical Schools.

“There’s lots of interest in new programs that focus on both college and career,” Savage said. “We’re starting to attract a much higher caliber of students.”

Even degree colleges are starting to see the benefits of vocational courses. Seth Bates, who teaches applied engineering at San Jose State University, started a remedial shop class for aspiring engineers who can’t use a power drill properly.

“By 1995, a student who came to us who had actually worked with tools was exceedingly rare, and now it’s almost unheard of,” he said. “Maybe it’s one out of 50 today. Most of them come in without a clue.”

Kyle Jennings, an advanced placement student at Saline High School, is determined to know his way around a machine shop by the time he starts an engineering degree. His dad, a Ford Motor Co. engineer, persuaded him to take shop. His friends mostly think it’s an “easy A” and has zero career value, he said.

“These classes really will help,” said Jennings, as he ferreted out a pressure leak in a Jeep Liberty one day in auto class. “You need to know how to work with machines.”

Write Your Own Story

Are you like Evan? Are you ready to take your passion of cars and turn it in to a lifelong career?

You’re never too young to start or too old to make a change. The LaFontaine Automotive Group is currently looking for more exceptional individuals to join our service teams.

So whether you’re still in high school and looking to find your way or are an experienced hand in the shop – we’d love to hear from you.

Start writing your own success story by contacting Todd McCallum at (248) 496-3777 or send him an email for details.