In 1969, the Blue Oval unleashed a variant to the Torino family simply known as the Ford Cobra.

The Cobra was only in production for two years, and it’s name was taken directly from the 428 Cobra Jet Engine that was included as standard equipment. 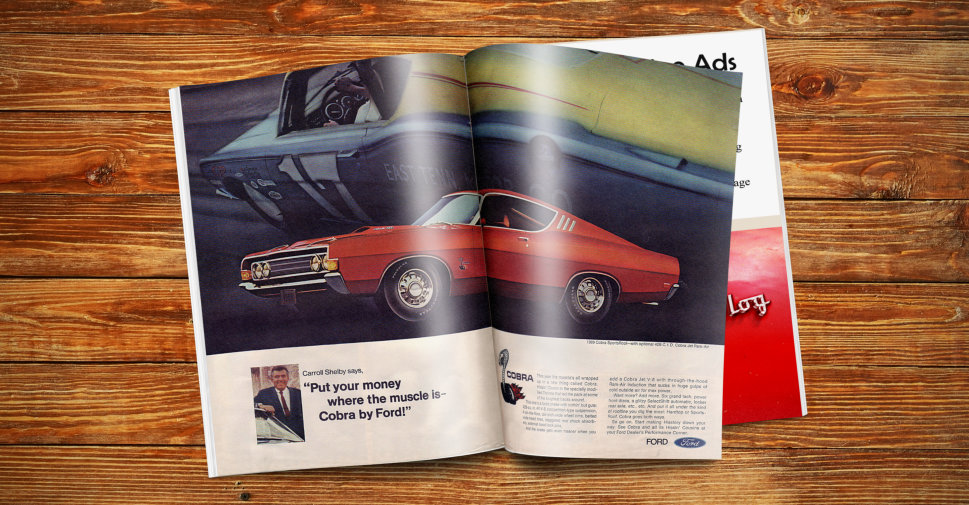 With only 14,000 or so of this specific vehicle built, by today’s standards the Ford Cobra is a bit of a rare find although it does have a strong enthusiast base.

So for #ThrowbackThursday, let’s travel back to 1969 and take a look at this vintage magazine ad for the Ford Cobra.

Put your money where the muscle is – Cobra by Ford!

Cobra: This year the muscle’s all wrapped up in a new thing called Cobra. Hissin’ Cousin to the specially modified Torinos that led the pack at some of the toughest tracks around.

And the snake gets even meaner when you add a Cobra Jet V-8 with through-the-hood Ram-Air induction that sucks in huge gulps of cold outside air for max power.

Want more? Add more. Six grand tach, power front discs, a glitzy SelectShift automatic, locker rear axle, etc., etc. And put it all under the kind of roofline you dig the most: Hardtop or Sports Roof, Cobra goes both ways.

So go on. Start making History down your way. See Cobra and all its Hissin’ Cousins at your Ford Dealer’s Performance Corner.

What do you think of this vintage ad for the 1969 Ford Cobra? Share your thoughts in the comment section below.

Don’t forget, each and every Thursday we post a new vintage magazine ad here on FamilyDealBlog.com. Be sure to sign up to recieve email updates so you never miss a new piece of content.