Today is Thursday so that can only mean one thing. Time to take a look at another piece of automotive advertising straight out of my personal vintage magazine collection.

As I was flipping through my mags looking for an interesting ad to share, I found what I was looking for in this ad for the 1975 Subaru GL Coupe. 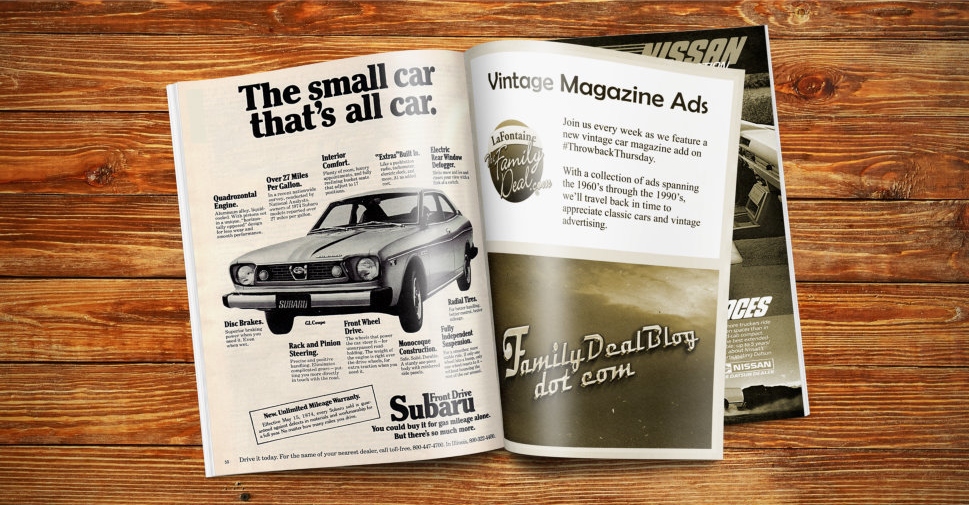 It’s not the flashiest ad in the world, heck it’s not even a color ad.

In today’s world of print advertising, this ad wouldn’t grab anyone’s attention, but back in 1975 it had enough to make an interested reader stop and check it out.

Set your Internet time machine back 40 years, and let’s take a look at this vintage magazine ad for the 1975 Subaru GL Coupe!

The Small Car That’s All Car.

Over 27 Miles Per Gallon. In a recent nationwide survey conducted by National Analysts, owners of 1974 models reported over 27 miles per gallon.

“Extras” Built In. Like pushbutton radio, tachometer, electric clock, and more. At no added cost.

Electric Rear Window Defogger. Melts snow and ice and clears your view with the flick of a switch.

Disc Brakes. Superior braking power when you need it. Even when wet.

Rack and Pinion Steering. Precise and positive handling. Eliminates complicated gears – putting you more directly in touch with the road.

Front Wheel Drive. The wheels that power the car, steer it – for unsurpassed road holding. The weight of the engine is right over the drive wheels, for extra traction when you need it.

Fully Independent Suspension. For a smoother, more stable ride. If only one wheel hits a bump, only one wheel reacts to it – without bouncing the rest of the car around.

New. Unlimited Mileage Warranty. Effective May 15, 1974 every Subaru sold is guaranteed against defects in materials and workmanship for a full year. No matter how many miles you drive.

Front Drive Subaru. You could buy it for gas mileage alone. But there’s so much more.

By itself, this ad for the 1975 Subaru GL Coupe may seem a little bland. However when you put it in the context of what the world looked like in the mid 70’s, it actually makes a lot more sense.

Warning: a brief History lesson in about to start in 3…2…1…

So as I was saying, the world was a different place in 1975.

As a country our unemployment rate reached 9.2% which prompted President Ford to officially recognize that our economy was in a state of recession thanks in part to the Oil Crisis of 1973 and the stock market crash of 1973-74.

Add it all up, and it was bad news for the Baby Boomer generation.

Heck, the reason why the national speed limit of 55 MPH was put in to place was in an effort to curb our consumption of gasoline by making drivers travel at more fuel efficient speeds.

This ad for the Subaru GL speaks to the average person living through the economic climate of the mid-70s.

Gas is expensive. Money is tight. Everyone needs to get the most bang for their buck if you will.

This magazine ad speaks directly to that.

Fuel economy is touted at 27 MPG meaning less trips to the pump and more dollars in your pocket.

Features we take for granted today like a rear window defogger, radio and clock are touted as being standard features in 1975 with no extra cost.

A full year warranty with unlimited mileage is another add-on that would speak to the average consumer of the time bringing extra piece of mind when purchasing a new car.

Today when you think Subaru, you probably think All Wheel Drive. But back in the 70’s Subaru was producing front wheel drive cars when the industry standard was rear wheel drive. Once again Subaru brings added value to their vehicles.

Simple and straightforward, the fact that this ad is black and white plays in to the worldwide economic situation at the time.

There’s no time for flash and sizzle, its all about the facts that would make a concerned consumer living through an economic crisis want to buy the 1975 Subaru GL Coupe.

Subaru’s reputation of value, quality an safety that was on display over forty years ago is still alive and well today.

You can experience it for yourself at LaFontaine Subaru in Commerce, Michigan.

Have any thoughts on this vintage magazine ad for the 1975 Subaru GL Coupe or the economic climate of 1975? Share your thoughts in the comment section below.