If you want to dominate your fantasy football draft this season, you’re going to have to prepare harder than you ever have before.

But don’t worry folks, I’m here to help you not just dominate your fantasy football draft, but to give you the tools you need to win your whole league. 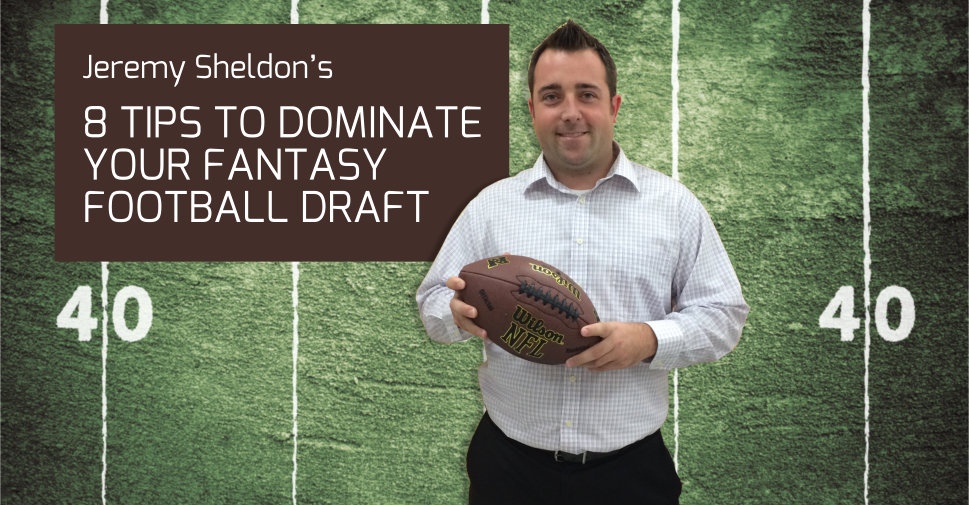 Unless you’re playing in one of my leagues that is…if you are, there’s nothing to see here. Move along….move along.

editors note: Jeremy Sheldon is the resident eCommerce Guru for the LaFontaine Automotive Group. He’s also one of the biggest fantasy sports geeks that I’ve ever met (he plays fantasy NASCAR for cryin’ out loud). This is Jeremy’s first article covering the fantasy football landscape in a series we expect to run all season long. -JS

The tips that I’ve provided below are directly out of my own fantasy football draft playbook. These are proven tips that I have personally used over the years to win the fantasy leagues that I play in.

The key to dominating your fantasy draft is to know who the key players are on each team.

Take your downtime a week or so before your draft and actually study the players, team depth charts, rankings, injury reports and so on.

This will help you the most in the later rounds in the draft when it becomes a little harder to make drafting decisions. When other teams are scrambling to make (bad) late-round picks, you can rest assured knowing that your draft preparation is about to pay off with quality players.

Mock drafts are a good way to see who is being drafted in what position. They also help you gauge how early you may need to select that sleeper you have your eye on.

If you do five mock drafts and your sleeper turns out to be everyone else’s sleeper, you can see where he’s being drafted and get an idea on when you would need to take him to ensure he’s yours.

Be wary about doing your mock draft too early as rankings fluctuate greatly. Wait to do them as close to your draft as possible.

3. Don’t Get Caught Up in Position Runs

If six WR’s go in a row and its your pick don’t feel pressured to take a WR. Remember, all this means is top players at other positions are falling to you!

Don’t overvalue bye weeks and skip over players because of this. This is a huge mistake, you should draft based on talent and not bye weeks.

9 times out of 10 your roster is going to change and those bye weeks (especially if they are towards the end of the season) wouldn’t have affected you anyway.

5. Save Defense and Kicker For Last

Unlike running backs who can be at the top of their position year after year, the best defenses and kickers change annually.

I can’t see any reason to take a defense or a kicker in any round other than the last two. Think about it like this, if you are in a 12 team league, you are guaranteed to end up with a top 12 kicker and defense.

Instead of worrying about the K and DEF, build up your team’s depth and take a flyer on a sleeper or two. Hopefully you’ll hit on one of them.

It should go without saying, it makes no sense at all to draft a backup kicker or defense. One is enough.

Pay attention to the teams close to you during the draft and monitor what positions they are still in need of.

For example, let’s say you have the 10th pick in a 12 team snake draft and you still need a QB. You notice that the two teams who pick after you already have their starting QB. This means you can wait until your pick on the turnaround to take your QB and you can snag a player that your competition might be eyeing with your current pick.

There’s nothing quite as satisfying in knowing that you managed to steal a pick away from another team right before their selection.

Make sure you take the time and actually look at your league settings and check the scoring system that’s in place.

Before you start researching for your fantasy football draft, this should be the first thing you do.

Knowing this tidbit of info will greatly affect your draft strategy because if you are in a PPR League with bonuses for yardage, that will propel the best WR’s to the top of your draft board.

When it comes to drafting a Quarterback or Tight End, either be the first or be the last to draft those positions.

Think about it like this: There are essentially 3 elite fantasy QB’s (P. Manning, D. Brees, A Rodgers) and 1 elite TE (J Graham).

So unless you are snagging one of the top players, you should wait as long as possible to fill those positions. If you don’t execute this strategy properly, it could ultimately cost you depth and production at your WR and RB positions.

And there you have it folks. My 8 tips to dominate your fantasy football draft!

Good luck on the upcoming season, and check back next week for my list of Sleepers that you’ll want to keep your eyes on.

Are you ready to dominate your fantasy draft? Let me know in the comments section below.