Memories of the North American International Auto Show are still fresh with us (and they were pretty darn great!). Now that the pizzazz of the concepts and the pristine wonder of the new vehicles have come and gone, it’s time for the accolades; or as we should call it, the Chevrolet Praise Awards. 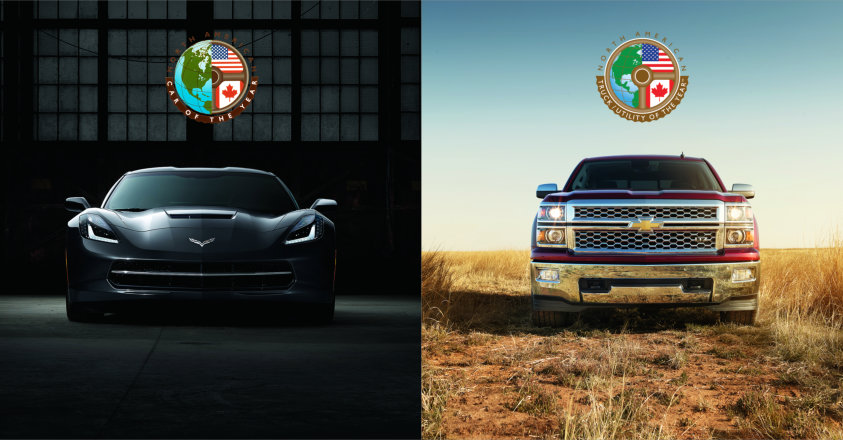 With so many people speculating on how Chevy managed to win both awards among such fierce competition, we sent our Digital Marketing Team downtown to investigate just how Chevy Rocked the Auto Show.

Chevy took a risk that paid off

The expression “if it ain’t broke, don’t fix it” comes to mind when thinking of the transformation of the Corvette Stingray. With such a popular and classic car loved in its current state, some might find breaking tradition to be a sign of trouble.

Luckily, the engineers at Chevy were up to the task. Lightweight aluminum replaces the steel frame, a new engine boasts some staggering stats (455 HP, 460 lb-ft. torque, 0-60 in 3.8 seconds…you know, that whole chestnut) and a perfect 50/50 weight distribution are just a few of the many new accommodations that await one in the souped-up Stingray.

The proof is in the pulling

Many factors go into purchasing a vehicle: fuel economy, durability, dependability, and value are just a handful of the decisions that decide which car comes home with you.

The 2014 Chevy Silverado gained a lot of fans with a new line-up of much more fuel-efficient engines and lighter construction, while still retaining the rugged durability that first gained attention. Whether for personal use or business reasons, the Silverado gained praise in all the right categories.

To gain just one of the North American Vehicle of the Year awards is prestigious; to grab up both speaks very highly of the hard work, craftsmanship, and care of the company. Chevrolet should be very proud of their accolades; and to this, we raise our imaginary glasses your way. Cheers!

How They Won The Awards

So how does a car or a truck win one (or both) of these awards?

Voting for the North American Car and Truck of the Year occurs in three stages.

Early in the fall, 49 independent automotive journalists (known as  jurors) consider all the new or substantially changed vehicles and pick a dozen or so cars and trucks, from what is called the long list, that they think deserve additional consideration. This vote results in what is called the short list.

Then in December the jurors vote on the short-list vehicles.

That vote narrows the field to three cars and three trucks. Those finalists are disclosed at a luncheon held by the Automotive Press Association in Detroit.

Then the jurors vote again on those three cars and three trucks.

Here’s the final votes as submitted by the jurors:

Don’t forget, if you need any more information on either of these award winning vehicles, the crew at LaFontaine Chevrolet is here to help you out!