Four outstanding Dearborn Public Schools teachers were honored by students, parents, colleagues and community leaders on May 14 at the 2014 Alberta Muirhead Teacher of the Year Awards Ceremony. More than 400 were at the event hosted by the Dearborn Area Chamber of Commerce at the Ford Community and Performing Arts Center.

The Chamber’s Education Committee, chaired by Stefanie Stover, had the tough job of selecting four winners from a field of more than 900 nominated teachers. 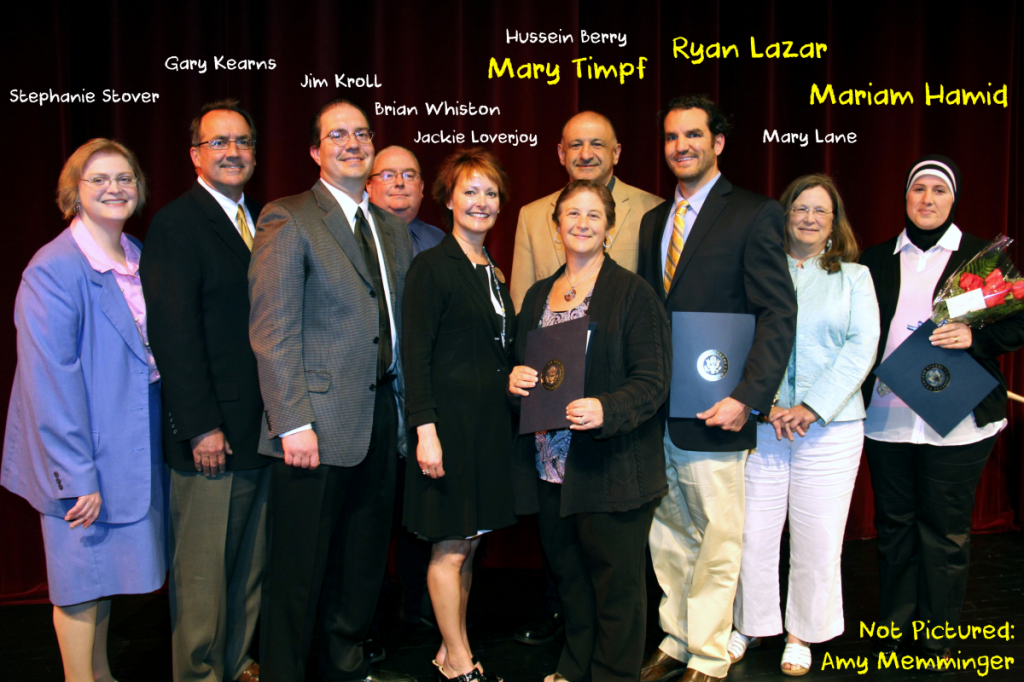 All teacher names and references to schools were removed from the nominations and forwarded to the first group of judges who read and sorted them. The top three nominations from each grade grouping were then sent on to final judging before the winners were named.

Jim Kroll, General Sales Manager of the LaFontaine Import Super Center was invited to attend the event to help recognize the award winners for their accomplishments.

The Winning Teachers for 2014 are:

Ms. Mary Timpf received the 2014 Pre-Kindergarten-2nd Grade Teacher of the Year Award. Ms. Timpf has been with the District since 1997 and started at Salina before moving to Geer Park.

Charles, the student who nominated Ms. Timpf wrote these words to describe how he felt about his teacher:

She always made me laugh and smile. She was never mad or sad, she was always happy. She always let us take off our shoes, even though our feet smelled bad.

Ms. Mariam Hamid from William Ford Elementary is new to the Dearborn Public Schools but already making an impact on her students receiving the 3rd-5th grade Teacher of the Year Award.

Student Mariam Sleiman nominated Ms. Hamid for the award. Among her comments about her Ms. Hamid, the student said:

My teacher…makes learning fun and makes us look forward to coming to school. (Ms. Hamid) has me come to school early on Fridays and helps work with me. She does this with some of the kids that need extra help. This has been the most fun school year because I am happy at school and I am happy learning.

“Let’s talk about real life,” is what Mr. Lazar often says, seizing the moment to teach a lesson when he hears someone comment or complain, according to student Haider Abdallah who nominated Mr. Lazar for the award. The student also said:

…I’ve never seen a sentence get a whole class listening like that. (Like the time) we walked in the room on a dark day and (Mr. Lazar) turned on the lights. Someone asked a question about electricity. Suddenly, we were learning about Edison and Tesla. Now we know the history of electricity and it’s not even history class! I want our teacher to know we are listening even though some of us pretend not to. Our teacher is more than a teacher, he’s a role model and that’s why I feel he deserves this award.

Ms. Amy Memminger will be wrapping up her ninth year with the District and has spent time at Dearborn High and Stout before landing at Fordson where she received the High School Teacher of the Year Award.

When nominating her teacher for the recognition, Senior Marty Dara said:

In addition to making me a better citizen, (Ms. Memminger) gave me the confidence I needed to be myself in all my quirky glory. Before her class, I was satisfied with doing the bare minimum. She convinced me of my potential and pushed me to explore options beyond what I had dreamed for myself. I am now unafraid to try new things. And for that reason, I will be attending Harvard University this fall.

The four honorees received a $1,000 cash prize and a hand-made glass apple award, and they are now part of a select group of Dearborn teachers who have been recognized by the community for their ability to make a difference. In addition, the school where each teacher of the year works received a cash prize.