Every year after I draft my fantasy football team I sit back and say to myself “yep, this year is my year!”.

And what’s not to feel good about? I did my research, I feel confident in my picks and the draft website projects me to finish towards the top of the league so It should be a breeze making it into playoffs.

Nothing to be afraid of here, right? 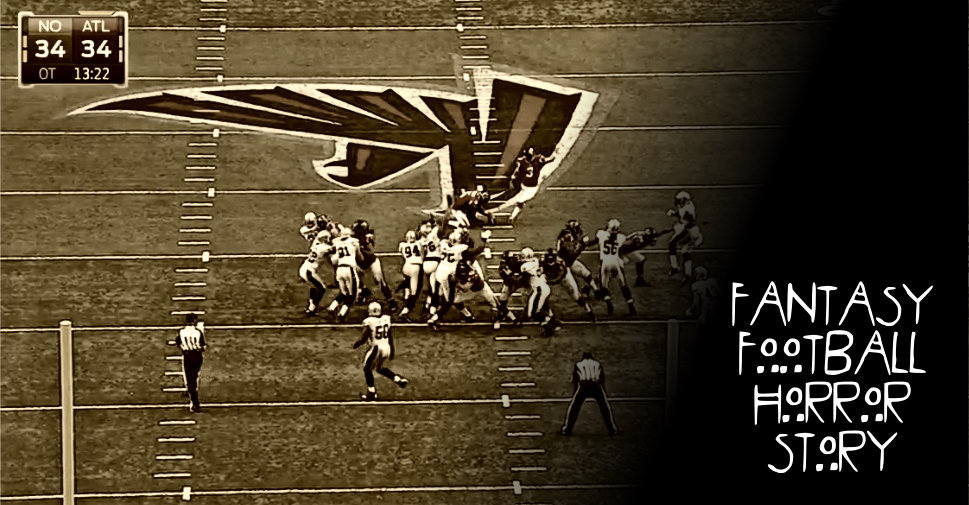 But then week 1 arrives, and some ominous things begin to happen to my fantasy football roster.

At first I write them off as coincidence and no big deal, but week after week it just keeps getting worse.

Tell me if you’ve seen this scary movie before.

It starts out with what appears to be a simple injury to a key player, but in a cruel twist of fate, the player ends up being lost for the season.

Next your top picks don’t live up to their draft position and are horribly under-performing.

In an act of desperation you try to shuffle your roster and move bench players into starting roles only to see the players on the bench outscore your starting lineup.

Throw in a bad trade or waiver wire move and before you know it you are halfway through the season with a losing record.

At this time, there’s only on thing left to do – Panic!

If you’ve played fantasy football for any length of time, you know exactly what I’m talking about.

So, here we are halfway through the regular season and there have been a ton of injuries and some very disappointing performances from too many top players.

As each week passes by, I find it harder and harder to watch football without feeling anxious about what might be lurking around the corner – just like a scary movie.

Every hit my guy takes I cringe fearing the worst and cover my eyes to avoid any potential gruesome scene.

So what are you to do?

Have no fear! I’m here to give you some advice that will help your fantasy football team survive the horrors of a long season so your team can get the happy ending it deserves.

Trade that pre-season top 25 player who is struggling. 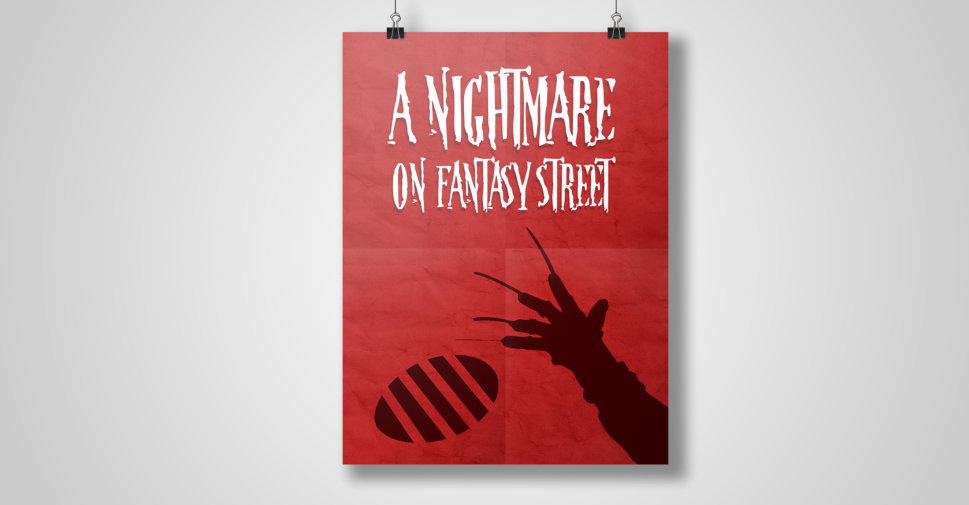 If there’s one player that defines Nightmare of Fantasy Street this year, it’s Doug Martin.

Martin got hurt in week 1 which caused him to miss the next 2 weeks. And in the three games he’s played since, Martin has only achieved double digit points once.

It looks like Martin’s season is going to continue to be a bad dream, so it’s probably time to consider trade offers for him.

Tampa Bay as a team is stuck in it’s own nightmare right as they’re constantly getting blown out most games and abandoning the run.

While you won’t get Round 2-3 value for Martin, my advice would be to try and trade him for a lesser known RB that’s puts up consistent numbers like Indianapolis RB – Ahmad Bradshaw or Buffalo RB – Fred Jackson.

Both players were taken much lower in drafts that you might be able to trade for.

You may also want to consider trading Martin in a package; you might be able to get more value if other players are involved.

Reconstruct your lineup for ultimate survival

The other day when going through all my different fantasy teams I noticed something intriguing.

The leagues that I’m doing the best in, all have a similarly constructed roster. Great WR’s, mid-level RB’s and a decent QB.

So that got me thinking that this can’t just be a coincidence and it seems to me that Fantasy Football is more of a WR game almost regardless of league scoring.

I’ve noticed that there are much more injuries for RB’s and that it is much easier to find starting RB’s on waivers throughout the season that it is to find WR’s that will help your team.

If it’s me I’m trying to trade or do whatever I can to get a top WR corps with a nice compliment of pieces around them.

Jason Voorhies can walk slow all he wants but he isn’t catching up to the top WR’s, let him feast on the RB’s like T. Gerhart, M. Ball, K. Moreno, R.  Bush, R. Jennings,  D Williams, J. Stewart, R Matthews…. OK you get the point.

Drop your struggling player and replace him with value 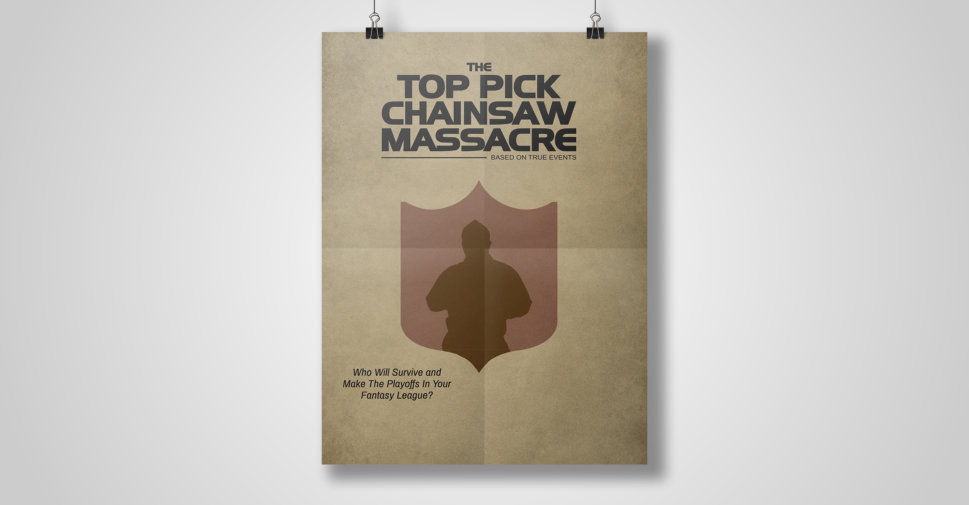 It’s time to let that guy go that hasn’t pulled his weight and free up a roster spot for a top waiver pick up or a RB not starting.

And yes, I’m looking at you Toby Gerhart!

Gerhart was supposed to be the workhorse in Jacksonville this year but he has been more like a second-rate Leatherface. Slow, lumbering and mostly ineffective.

I don’t know about you but it’s gotten so bad that I scream every time I see Gerhart touch the ball.

Each Sunday seems to be the sequel to a scary movie – similar plot, different opponent, same result.

My advice? Drop these type of players before they drop your team to the bottom of your league standings.

This one only works if you have a free roster spot or two each week and you don’t have a small transaction cap.

What I have been doing is picking up a backup RB or 2 that is available on waivers and if the starter gets hurt you don’t have to hope you have a top waiver pick up because you scooped him up already.

For example I dropped my backup TE and picked up Giants RB A. Williams a couple weeks ago and wouldn’t you know it, that week R. Jennings goes down and Williams is in!

You never want to wish an injury on somebody but just like the movie Saw, the odds are somebody isn’t going to make it through their game.

Silence Of The Rams

You probably don’t want to associate with these players 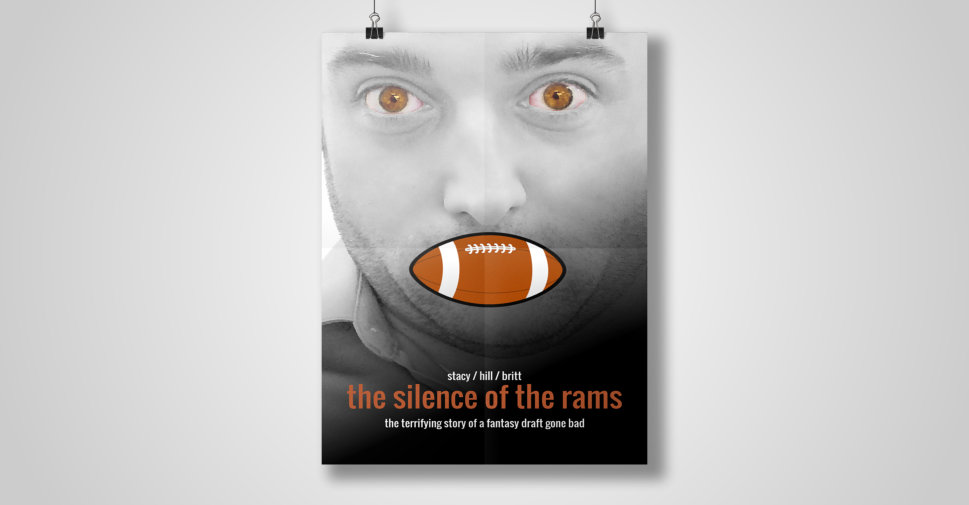 There’s always that team or two that is simply awful, but still delivers a couple of solid fantasy players that can help you win.

One of those teams is the St. Louis Rams who’s RB Zac Stacy was a preseason top 30 ranked player but as the season has worn on he hasn’t produced anything close to his early ranking.

So far through 5 games he is averaging less than 50 yards a game and he only has 1 TD on the season. To make matters even worse the Rams are going with a 3RB System with Benny Cunningham, Zac Stacey and they recently started giving carries to Rookie RB Tre Mason.

So if it were me I would be silencing any Rams on my team with a trade or just a flat out drop.

Well hopefully some of these tips will help your team make it through the Fantasy Football Horror Movie of 2014!

Fantasy Football is a scary game with Turf Monsters and Quarterback Killers waiting to ruin your season.

My advice would be to run fast, don’t trip and whatever you do don’t fall asleep while the game is on, your Fantasy Players may never make it out!