This month, Ford celebrated the production of their 10 millionth mustang to be made at the Flat Rock Assembly Plant in Michigan. Being one of the most established sports cars to be made and purchased around the world, this was an exciting and memorable day for Ford.

From 1965 to 2018, Ford has introduced over 20 different mustangs and has made its mark as being one of the most iconic sports cars to be produced in the world. Not only has the Mustang made an imprint in the lives of many loyal Ford consumers, the vehicle continues to improve year after year. 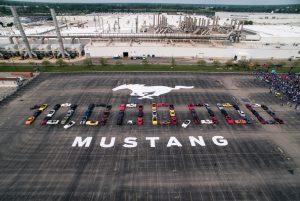 Along with that, over 60 Ford Mustang owners of all models collaborated and assembled to honor the milestone Ford. has made over the years, making for a very memorable moment in time.

According to Ford Motors, Not only has Ford made history with producing the 10 millionth sports car of their own, but they have also earned the title of being America’s best-selling sports cars over the last 50 years, based on Ford’s analysis of 1966-2018 total U.S. new vehicle cumulative registrations for all sports car segments supplied by IHS Markit. With that, the Ford Mustang page has more likes on Facebook than any other vehicle nameplate and continues to impress followers, on and aside from social media.

As told by the president of global markets at Ford Motor Company, Jim Farley stated that, “Mustang is the heart and soul of this company and a favorite around the world.” With that, Ford will continue to prosper and will always inspire consumers across the world to live freely, just as a Mustang would do.