Barra emphasized that the company has adopted and will continue to adopt sweeping changes in the way it handles safety issues.

It seems this latest recall may be a direct result of the restructuring of GM’s recall decision making process.

Please note that not every one of the vehicles that were produced and sold are being recalled.

We can help you determine if your specific vehicle is a part of this recall.

Below are the vehicles affected by the latest GM recall: 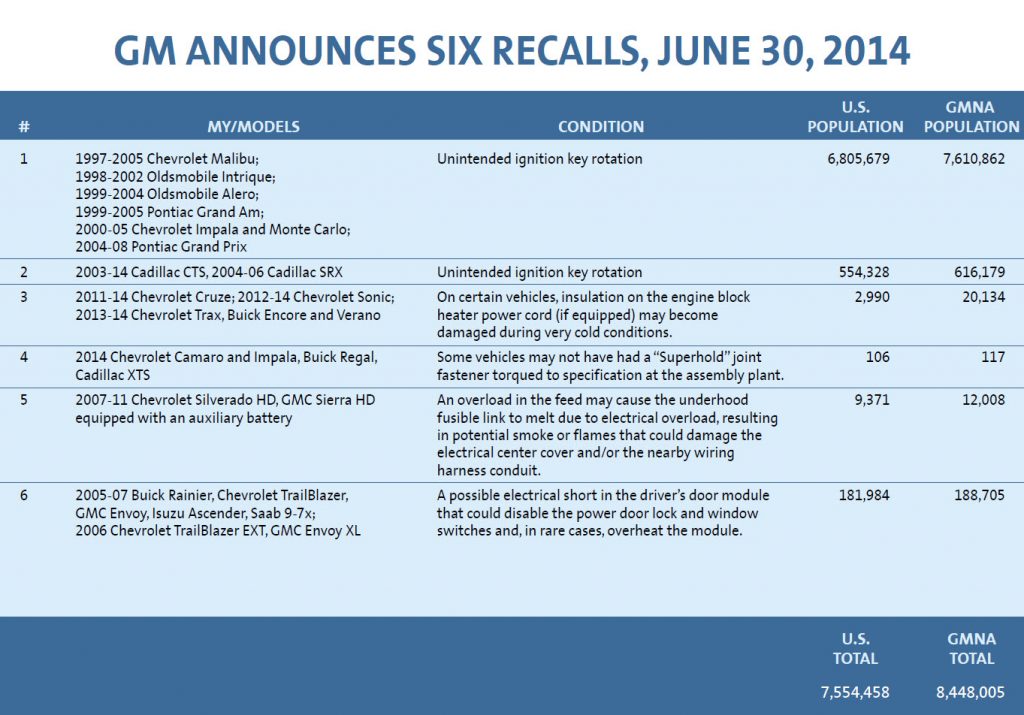 Some vehicles may not have had a “Superhold” joint fastener torqued to specification at the assembly plant (106 U.S. Vehicles)

An overload in the feed may cause the underhood fusible link to melt due to electrical overload, resulting in potential smoke or flames that could damage the electrical center cover and/or the nearby wiring harness conduit. (9,371 U.S. Vehicles)

A possible electrical short in the driver’s door module that could disable the power door lock and window switches and, in rare cases, overheat the module. (181,984 U.S. Vehicles)

DETROIT – General Motors announced today it will conduct six new safety recalls in the United States involving about 7.6 million vehicles from the 1997 to 2014 model years.

“We undertook what I believe is the most comprehensive safety review in the history of our company because nothing is more important than the safety of our customers,” said GM CEO Mary Barra. “Our customers deserve more than we delivered in these vehicles. That has hardened my resolve to set a new industry standard for vehicle safety, quality and excellence.”

Among these recalled vehicles, GM is aware of seven crashes, eight injuries and three fatalities. The fatal crashes occurred in older model full-size sedans being recalled for inadvertent ignition key rotation. There is no conclusive evidence that the defect condition caused those crashes.

“We have worked aggressively to identify and address the major outstanding issues that could impact the safety of our customers,” Barra said. “If any other issues come to our attention, we will act appropriately and without hesitation.”

GM has made changes to every process that affects the safety of its vehicles, and the company has acted or will act on all 90 of the recommendations put forward by former U.S. Attorney Anton Valukas in his independent report to the company’s Board of Directors.

GM expects to take a charge of up to approximately $1.2 billion in the second quarter for the cost of recall-related repairs announced in the quarter. This amount includes a previously disclosed $700 million charge for recalls already announced during the quarter.

Until the ignition recall repairs have been performed, it is very important that customers remove all items from their key ring, leaving only the vehicle key, and always use their seat belts. The key fob, if present, should also be removed from the key ring.