When you work for an Automotive Group that carries vehicles from 17 different manufactures, it’s not uncommon for one or more of the brands to take home a prestigious industry award on a regular basis.

Today is no exception as Hyundai has just been named the top performing non-premium brand in 2014 JD Powers Initial Quality Study! 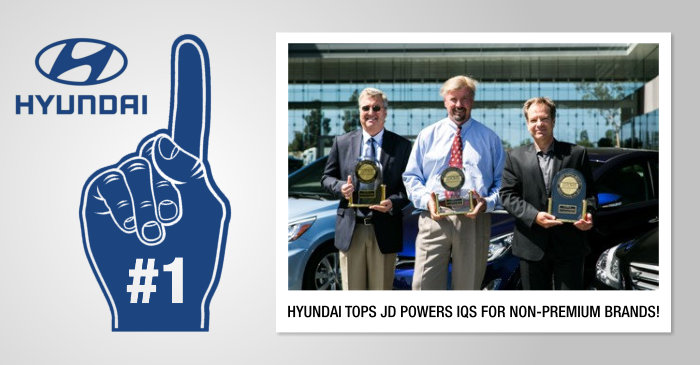 I know the LaFontaine Family is proud to tout the fact that 6 of the 10 vehicles in the Hyundai lineup ranked in the top 3 IQS positions by segment – with the 2014 Genesis, 2014 Elantra and 2014 Accent taking the #1 spot for their segments.

On behalf of the team at LaFontaine Hyundai, we’d like to congratulate Hyundai Motor America for achieving this honor – we’re proud to represent you and your vehicles here in Dearborn, Michigan.

J.D. Power today presented three Hyundai vehicles – 2014 Genesis, 2014 Elantra and 2014 Accent – their highest award for initial quality in their respective segments. Hyundai ranked fourth overall in initial quality, climbing six spots from last year, and was the highest-ranked non-premium brand. In total, Hyundai had six vehicles in the Top Three positions in their segments, including two second place finishes for Santa Fe and Sonata and a third-place finish for Equus. This year’s results mark the third time Hyundai has been the highest-ranked non-premium brand in the past 10 years, and the third time it finished among the Top Four brands overall. 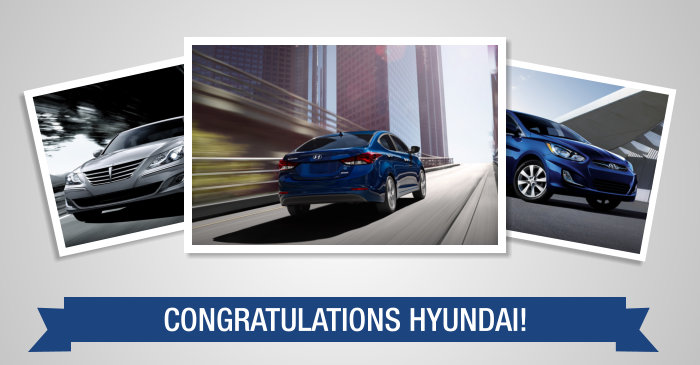 The award comes from the J.D. Power 2014 U.S. Initial Quality StudySM (IQS). Now in its 28th consecutive year, IQS is the industry benchmark for new-vehicle quality, measured at 90 days of ownership.

“Receiving IQS awards in multiple vehicle segments acknowledges Hyundai’s commitment to quality and customer satisfaction across our entire product lineup, not just our luxury vehicles,” said Dave Zuchowski, president and CEO, Hyundai Motor America. “Today’s awards are a true reflection of the hard work and dedication of all the Hyundai team members here, in Korea and Montgomery, Alabama.”

The IQS serves as the industry benchmark for new-vehicle quality and has proven to be an excellent predictor of long-term reliability, which may significantly impact new-vehicle purchase decisions. The focus of the study is model-level performance and comparison of individual models to similar models in respective segments, which helps manufacturers worldwide to design and produce higher-quality vehicles.

About the J.D. Power and Associates 2014 Initial Quality Study

The 2014 U.S. Initial Quality Study is based on responses from more than 86,118 purchasers and lessees of new 2014 model-year cars, trucks and multi-activity vehicles surveyed after 90 days of ownership. The study is based on a 233-question battery designed to provide manufacturers with information to facilitate identification of problems and drive product improvement. The study was fielded between February and May 2014. The study is used by manufacturers worldwide to improve quality and by consumers to help them make more informed purchasing decisions. Throughout the years, initial quality has been shown to be a leading indicator of long-term durability, which directly impacts customer loyalty and purchase decisions.