I wanted to talk some huge news in college football a few weeks ago, but due to some referee type issues during the Detroit Lions Playoff game vs the Dallas Cowboys I had to put it on the back burner.

Now that the dust has settled and Lions fans have come to the realization that the Lions season is over we can talk about one of the biggest stories locally and nationally in College Football.

That is the news that the University of Michigan hired Jim Harbaugh to become the next head coach of Michigan football. 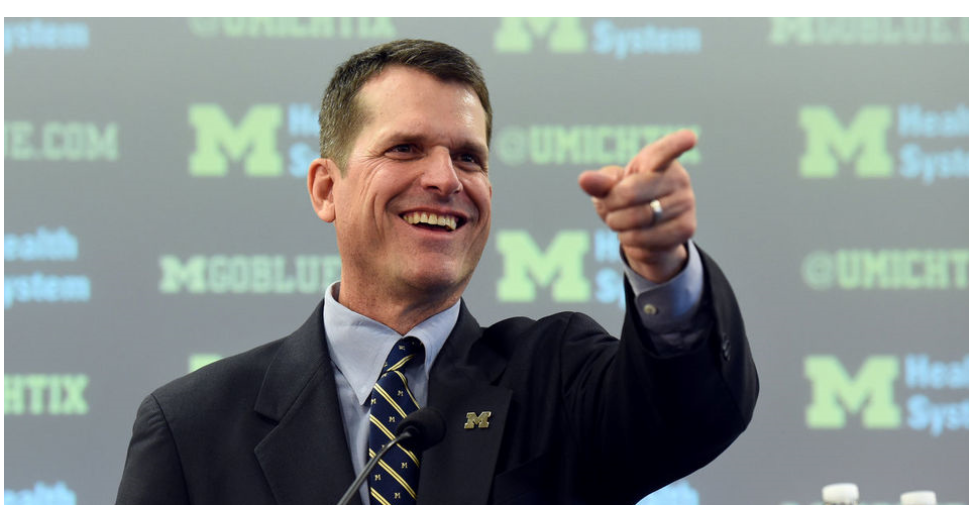 As soon as this was announced Michigan fans everywhere breathed a sigh of relief.

Being a Michigan fan myself and talking to my fellow Wolverines it was pretty clear that most fans weren’t going to be happy unless the University got Harbaugh.

Well, we got him and the effects of this hire have produced immediate buzz around the program and with potential recruits.

This is big because Michigan was losing recruits faster than I have ever seen towards the end of the season and after Brady Hoke was fired.

Five-star running back Damien Harris, five-star wide receiver George Campbell and four-star corner Shaun Crawford all backed out of their pledges before the season began.

So with all that said, Michigan is headed into next season with only 6 committed recruits.

While it might look like on paper that Michigan Football recruiting is a mess right now, I have a sneaky suspicion that the program is going to be just fine,

In the weeks since his hire, “The Harbaugh Effect” is already beginning to make an impact.

Recruits like five-star cornerback Iman Marshall and 12th-ranked receiver Cordell Broadus are now considering Michigan solely based on the hire of Jim Harbaugh.

There has also been talk from student-athletes that decommitted who are now rethinking their stance.

For instance, five-star tight-end Chris Clark recently said that the Wolverines “instantly move toward the top of his list” with Harbaugh on board.

To see the immediate impact of this hire all you had to do was hop on Twitter, here are some tweets.

I gotta get up to Michigan with the hire of Jim! #GoBlue〽️

On the same flight to Orlando with Michigan recruit Andrew David. Lots of excitement over possibility of Harbaugh with recruits #UM

Gotta go back up to Michigan if Harbaugh takes the job!!! — Elijah Holyfield (@EH_taught_me) December 28, 2014

Well Michigan fans…we wanted Harbaugh, we got Harbaugh and now it’s time to get down to business.

Jim Harbaugh now has the weight of one of the largest and most passionate fan bases on his shoulders and I know I’m not alone in crossing all of my fingers (and toes) in hopes that he can turn this program around.

Of course only time will tell how this story ends but we can already see a brighter light shining down on Ann Arbor and it is an exciting time to be a Wolverine.

What do you think? Is Coach Harbaugh the person who’ll lead Michigan Football back to national prominence? Share your thoughts in the comments below.