Things looking bad for your fantasy football team after Week 1?

Maybe you’re in the exact same position I’m in. You lost your game, two of your running backs got hurt and your starting QB was awful (true story). 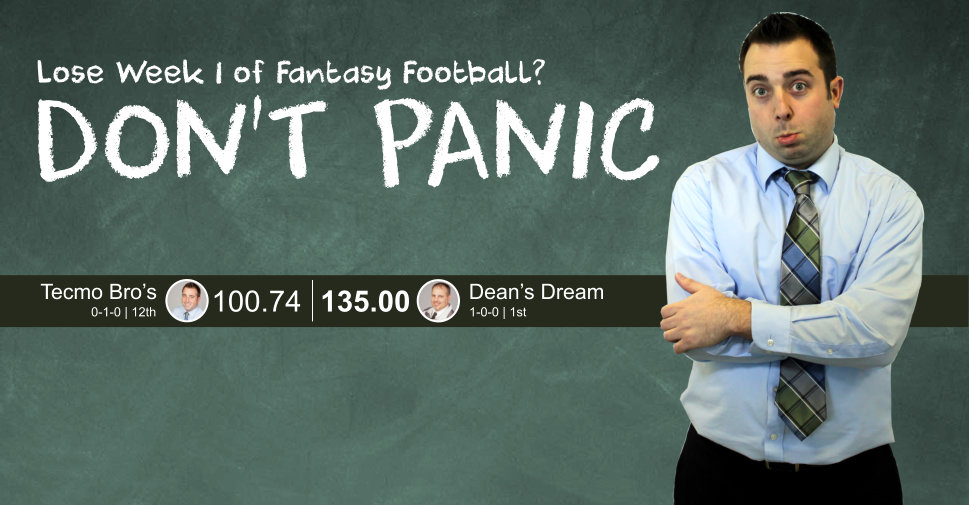 Clearly things aren’t looking up and you’re now in a nice hole to start the season.

But if there is one thing that I have learned over the years of playing fantasy football, it’s do not over-react, do not panic and do not trade or drop any players based off week one’s results.

This is the classic reaction for a lot of Fantasy Players, they realize that the football season is short and they don’t want to fall too far behind.

I totally understand that and I would just like to remind you that all you have to do is win enough games to make the playoffs!

No one is going to go undefeated and I don’t know about you, but in almost every league I’m in every year, the teams with the most points and top seeds rarely win the title.

I’ll tell you from experience that there’s no worse feeling than trading away an under-performing player early in the season at a discount only to see them blow up the rest of the season.

Here are a few tips that can get you back on the right track without you having to trade some of your top players because they struggled Week 1.

If you had key injuries to any of your starting RB’s, try and pick up their back up if available.

You can also put in waiver claims for other teams backups that may have got hurt as well. You might be able to use these players as fill-in’s if you’re not thrilled with your backups or as potential trade bait.

2. Take Advantage of Your Opponents Weaknesses

Scout your opponents and look to see if somebody else in your league also struggled in Week 1 and is in panic mode.

You might be able to swing a trade and get a big name that struggled Week 1 at a discount.

(And shame on your opponents if they aren’t aware of this tactic because they didn’t read this article).

Take a look at waivers and see if there is anybody that surprised in Week 1 that wasn’t expected to.

For example, Jacksonville WR Allen Hurns (one of my deep sleepers) and Baltimore WR Steve Smith Sr (who was pretty much forgotten about) just might be available for you to pickup in your league.

I know you might have one of the top defenses statistically, but that doesn’t mean you would want to play them every week.

Check and see what defenses are on waivers and if you have an expendable player (Miles Austin, anyone?!) you might want to play match-ups and pick-up a defense that’s playing an awful offense like the Giants or Rams.

Stand pat with the team that you drafted it has only been one week!

Have confidence in your picks, and don’t be tempted to do something you might regret.

Follow these simple tips and don’t over react to one week of fantasy football.

It is a long season, so hang in there and remember all you have to do is make the playoffs.

See you next week and good luck in Week 2!