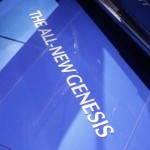 The 2015 Hyundai Genesis is about to arrive, and there's a lot to like about the updated luxury sedan from Hyundai. You're probably here because you want to know how the 2015 Genesis comes equipped and how much it is going to cost - so let's get right down to it... 2015 Hyundai Genesis … END_OF_DOCUMENT_TOKEN_TO_BE_REPLACED