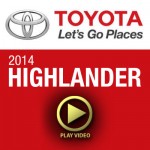 When the all-new 2014 Toyota Highlander made it's debut at the 2013 New York Auto Show, one thing was made perfectly clear: The redesigned SUV from Toyota was going to set the new standard for which all 8 passenger SUV's would now be judged. Sporting a sleek, bold styling and featuring … END_OF_DOCUMENT_TOKEN_TO_BE_REPLACED