The New York International Auto Show introduced the world to some bold new concepts and stylish new redesigns; Nissan embraced the latter with its 2015 Nissan Murano.

While the Murano is technically a concept vehicle, it’s important to remember that Nissan creates concepts with a focus on actual production and not just to wow the audiences at auto shows.

You can expect much of what you see here to make it’s way in to the production version of the 2015 Nissan Murano.

Right off the bat it’s clear that Nissan is trying to incorporate the 370Z v-shaped headlights into many more of their future vehicles.

The boomerang-style lights that made their way onto the redesigned Juke and Sports Sedan Concept are evident here on the Murano as well.

Aerodynamic styling has also been worked into the redesign, making the third-generation Murano the most streamlined version yet.

Perhaps the most impressive aspect is a roughly 130 pounds being dropped off the vehicles weight, increasing fuel economy by about 20%.

I’ll be honest here, the boost in fuel efficiency is greatly appreciated. One of the caveats of the current-gen Murano is a somewhat shallow mpg range; with a tune up to the engine and new streamlined styling, better gas mileage will attract a much larger fanbase.

Moving into the cabin we see a much more fluid interface, similar to the redesigned 2014 Nissan Rogue. 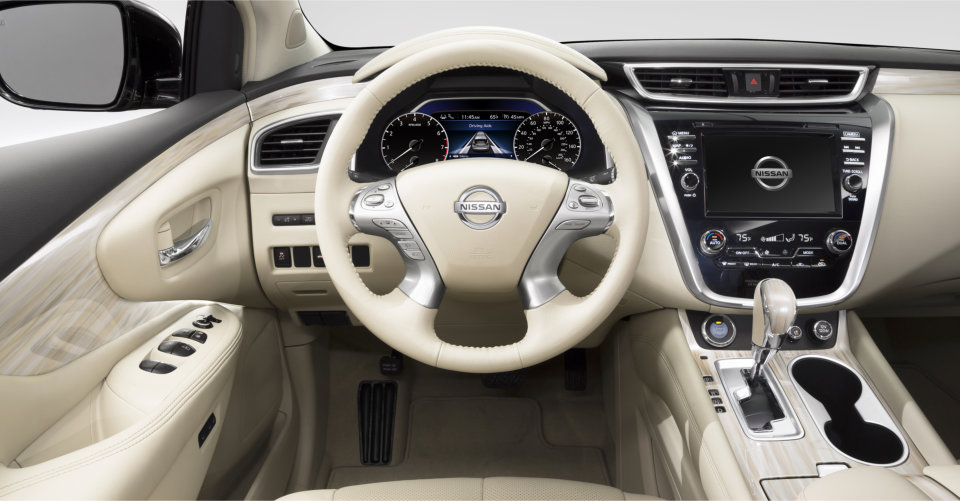 The ignition button has been interestingly moved from just to the right of the steering wheel to the center console (this could be something simple like a concept idea, but who knows!).

The zero-gravity seats implemented into the new Altima and Rogue are featured here as well, reducing fatigue on long trips.

Extra touches such as front and rear USB ports for media, as well as ambient lighting that kicks on depending on the time of day, make this the most sophisticated and luxurious Murano ever.

Nissan revealed we should be seeing this new iteration later this year. The new Murano will be available in front-wheel drive or all-wheel drive and offered in four grade levels when it goes on sale in late 2014: S, SV, SL and Platinum.

I know I’m looking forward to getting to know the 2015 Nissan Murano and so is the rest of the team here at LaFontaine Nissan.

What do you think about the redesigned Nissan Murano? Let me know in the comments section below!