Imagine spending 51 consecutive hours doing only one thing, with no sleep and only a ten minute respite every hour to break up the monotony.

Now imagine that one thing is having your lips kissing a car while both of your feet remained firmly planted on the ground. 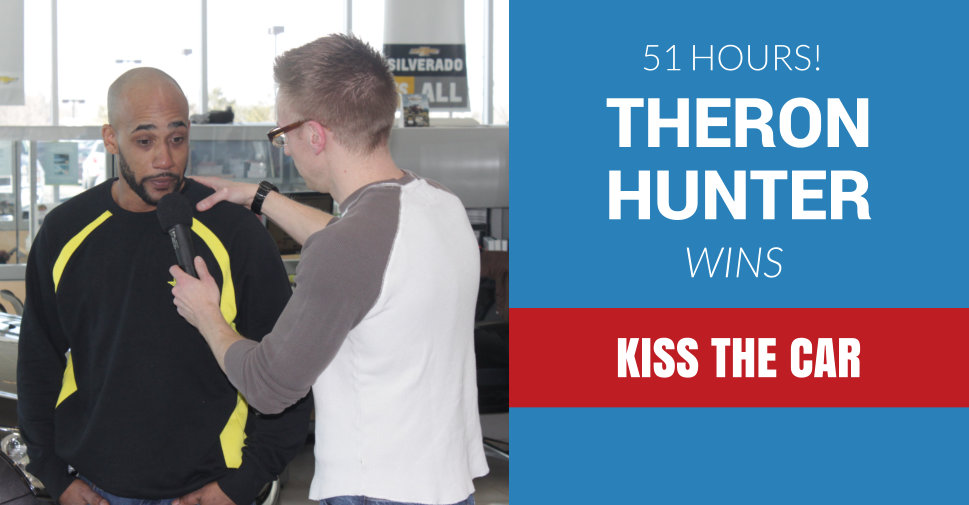 That’s exactly what Theron Hunter did in an effort to win the 5th Annual Kiss The Car contest put on by LaFontaine Chevrolet and 102.9 W4 Country.

At 12:00pm on Saturday, February 21, 2015 thirty people began kissing one of two Chevrolet Cruze’s at LaFontaine Chevrolet in hopes of winning a two year pre-paid lease on one.

The next 51 hours would be a lesson in determination and will-power as contestants gave it their all to remain in the game.

Some contestants we’re bribed off the cars early with concert tickets, tickets to sporting events, gift cards and other freebies. Others resisted the bribes and continued kissing the car only with the ultimate prize in mind.

By 8:30 AM the next day, just nine contestants remained kissing the car. Twenty-one had either involuntarily lifted a foot off the ground, pulled their lips off the car or had simply given up.

Over the next 24 hours, six of the remaining nine contestants would also bow out leaving only three people kissing the car.

After coming back from a brief ten minute break Steven Gray, Brittany Shiow and Theron Hunter begain kissing the car again in a battle of wills to be the last person kissing the car. 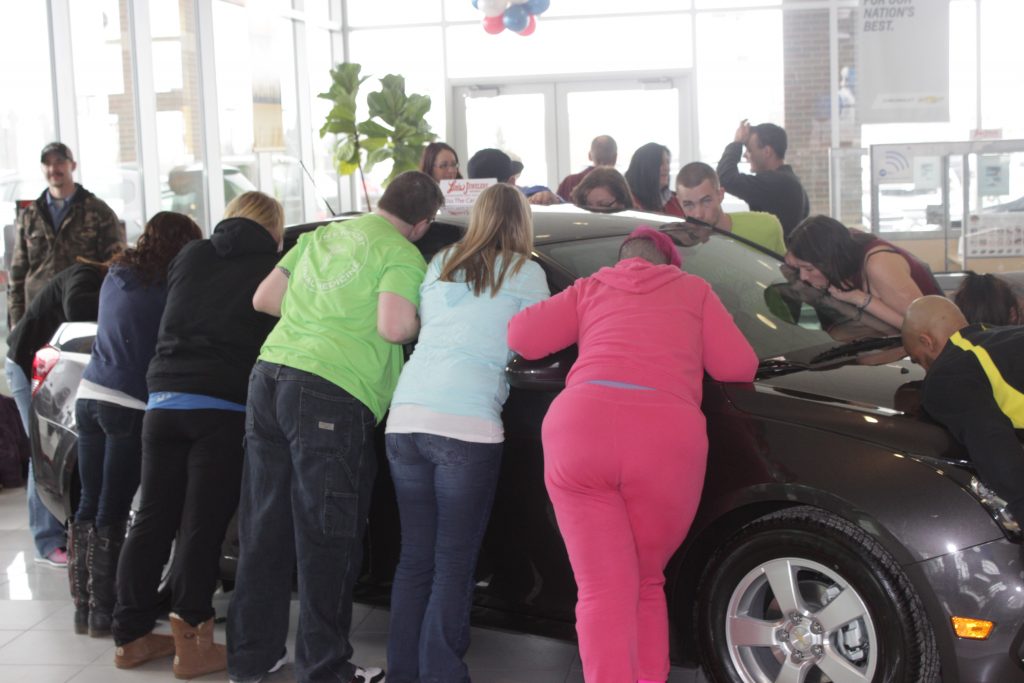 Just two hours later, however, Bubba from 102.9 W4 Country offered a bribe package for the three finalists to consider.

In the end, the lure of concert tickets, NASCAR tickets, gift cards, and earrings from Lewis Jewelers was too much for Brittany to pass by. She jumped on the bribe and jumped off the car leaving Steve and Theron alone to battle for the Chevy Cruze.

What happened next will go down in the annals of Kiss the Car history.

The next five hours would feature Steven and Theron valiantly kissing the car. When I talked to both contestants, each seemed to have his wits about him and was in good spirits.

Then at 3:10 PM, after just getting back on the car from a ten minute break, Steven lost his concentration and inadvertently lifted a foot off the ground.

And just like that, 51 hours after the event had begun, Theron Hunter was the Kiss the Car champion and grand prize winner!

When it was all said and done, I think all the contestants will be able to say that they participated in a one-of-a-kind event that they’ll not soon forget.

Congratulations to Theron, Steve, Brittany, everyone who participated and those who followed along with the all the action on the Kiss the Car livestream.

Did you enjoy Kiss the Car 2015? Share your thoughts about the contestants and the event in the comment section below.